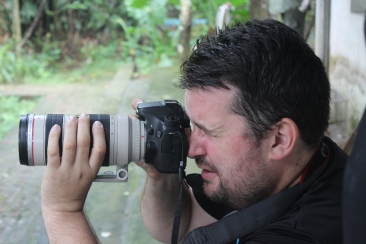 Joel Sartore (left) and Pierre Chabannes on a spider shoot in Bolzano, Italy. We are shooting today at the Natur Museum in Bolzano (Museo Scienza di naturale), Italy.

Pierre’s involvement with media outlets started as a photographer and writer for magazines, forums and websites specializing in zoology and animal conservation. He has been published in International Zoo News, Avicultural Magazine, Watchbird, the Internet Bird Collection, ARKive, and many others. Since 2015, Pierre has been the scientific advisor behind the National Geographic Photo Ark project and is a consultant  for National Geographic Editions.

We offer the Following Services

Hear from our clients

« I have had the pleasure of working with Pierre de Chabannes, who has applied his expert knowledge conscientiously and efficiently to two of our most successful books. We count on Pierre for his vast and up-to-date knowledge of animal species, and thanks to him we know that the scientific information conveyed in our books in current, accurate, and based on the most recent decisions made in the scientific community »
Susan Hitchcock
Senior Editor, National Geographic Society, National Geographic Editions (USA)

« In addition, [Pierre] is a remarkable photographer of […] animals, having thus documented more than [11,000] taxa across the animal kingdom. […] He has written extensively for international publications. The Avicultural Magazine (published in Britain since 1894) presented him with its award for most well illustrated article of 2010. »
Josef H. Lindholm, III
Curator of Birds, Tulsa Zoo, OK (USA)

« I have during the past two years been delighted to publish a series of articles by Pierre de Chabannes […] He is obviously extremely knowledgeable about birds and bird keeping and zoological and wildlife collections around the world. In addition, he is an excellent photographer and we have greatly enjoyed seeing his photos […] which he has used to illustrate his articles and which have made them such a highlight of recent issues of the magazine. In recognition of this, the Avicultural Society council judged him the worthy winner of the Dulcie Cooke Award for his outstanding photographs in the magazine during 2010. »
Malcolm Ellis
Honorary Editor, The Avicultural Magazine (UK)